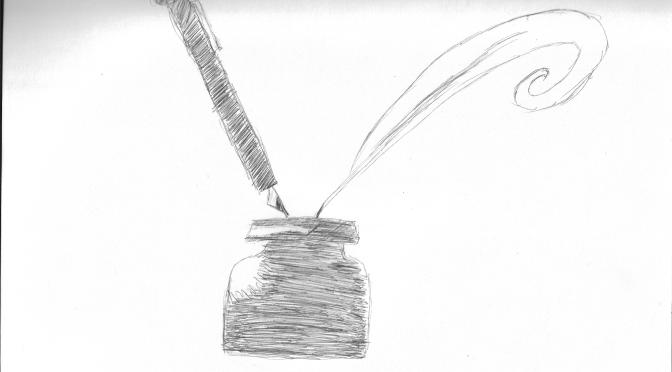 A man once said that a writer was the only sort of person that he knew of that thought that he could accomplish more by doing nothing. In this I am not exempt, for more often enough when I would make any attempt at writing down a story, I would find myself staring down at a blank piece of paper, twiddling a pencil between my fingers, uncertainty plaguing my mind as I sought to create an epic that will survive the ages. This isn’t always a result of writers block, but rather a fear of, for lack of a better term, making it impalpable. To write it down would be to write it on stone, because when it’s all floating up in your head you can change it however you want it from adventure to romance to mystery to who knows what, but when you write it down it’s almost like it’s unchangeable. Even when you know that you can just start-up a new draft, there’s still a strange feeling of wrongness about it. Also it can just be hard to put your story into words. You can see it easily enough in your mind’s eye and go through the scenes as you please, but when you write it down you have to be descriptive, ascribing colourful details that bring your story to life, but too much detail and reading it will seem more like a chore having to bog through rather than a luxury, but neither can be lacking in detail and thus making your characters and story boring and engaging, unless, of course, you were trying to make a character or place strange and unknowable by purposely making it vague. Simply put you must moderate your detail to the context of the scene or character or even story. Take for example, if you were to write an adventure, you would add greater detail, an action scene, or if you were writing a children’s book you would write in detail the adorableness of a squirrel or caterpillar or kitten, and if you were writing a trashy romance novel you would write in detail about… trashy… romance… stuff. Anyway, I hope this blog entry will provide some insight into writing.

There goes my 9 bulls I sorted out of about 187 cows, heifers, and 90 or so calves. All went very well and I had the bulls in that hay barn waiting for Dallas to arrive with trailer. With only a poly rope and an open trailer door all bulls loaded quietly. How do I do this by myself on foot? I put all animals in the road held by poultry netting, then quietly sorting in two directions. Bud Williams training, quiet cattle, and it’s not my first rodeo. Train yourself, train your stock. Have quiet bulls that respect you. #budwilliamsstockmanship #handnhandsolutions